Consumer sentiments as measured by the degree of optimism about the state of the economy and prospects have dropped to the lowest level during a one-year period ending 2021, the latest report from the central bank’s summary of macroeconomic and financial data has shown.

The consumer confidence indicator, which is expressed through activities of saving and spending, dropped to 88.1 in December 2021 from 102.8 in the same period of 2020. More tellingly, this consumer sentiment has declined consistently from 93.9 in October 2021 to the current level in December 2021.

The survey not only depicts the sentiments of consumers about the economy but also provides an indication of future developments for households’ consumption and saving – based on answers regarding their expected financial situation, their sentiments about the general economic situation, unemployment and capability of saving.

An indicator above 100 signals a boost in the consumers’ confidence toward the future economic situation – as a consequence of which they are less prone to save and more inclined to spend money on major purchases in the next 12 months. Values below 100 indicate a pessimistic attitude toward future developments in the economy, possibly resulting in a tendency to save more and consume less.

The Bank of Ghana Governor, Dr Ernest Addison, attributed this to the rise in fuel prices and new tax measures announced in the 2022 budget.

“…consumer confidence softened because of recent increases in ex-pump petroleum prices and the announcement of new tax measures in the 2022 budget,” he said in the Monetary Committee Policy report. 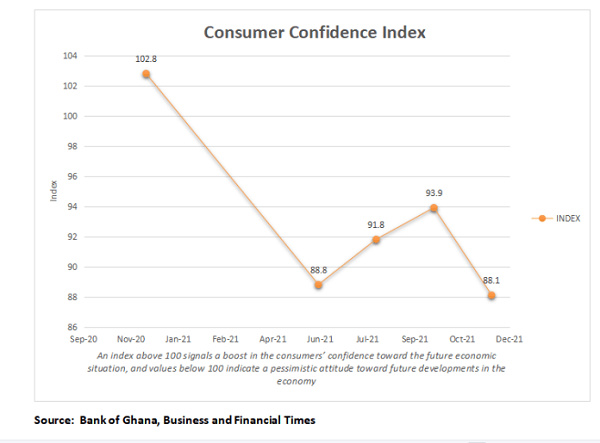 The 1.75 percent tax on all digital financial transactions was one of the main proposals of the government in the 2022 budget presented to parliament. This has been met with mixed reactions from the public, as it is argued that it will place an extra burden on the finances of the populace.

Over the last two weeks, petrol and diesel prices rose by roughly three percent, from GH¢6.70 a litre on average terms at most pumps to reach GH¢6.94 per litre. The current national average price for petrol is pegged at GH¢6.90 per litre, while diesel stands at GH¢6.98. Meanwhile, crude oil traded at over US$90 per barrel on Tuesday morning – a situation that could soon trigger an increase in transport fares.

According to the Institute of Energy Security (IES), fuel prices are expected to go up by 25 pesewas per litre from February 1, 2022, if the suspended Price Stabilisation and Recovery Levies (PSRL) is reintroduced on the back of an 8.52 percent increase in the price of Brent crude and a marginal depreciation of the cedi to the US dollar during the last two weeks.

Further depreciation of the Ghana cedi against the US dollar on the foreign exchange (forex) market adds to the factors that will push up the prices of commodities on the local market.