WASHINGTON – The U.S. Energy Information Administration estimates that OPEC members earned almost $711 billion in net oil export revenues in 2018. The estimate is up 29% from 2017, but about 40% lower than the record high of almost $1,200 billion in 2012. The 2018 earnings increase is mainly a result of higher crude oil prices. The Brent spot price rose from an annual average of $54/bbl in 2017 to $71/bbl in 2018. However, EIA forecasts annual OPEC net oil export revenues will decline to $593 billion in 2019 and to $556 billion in 2020. Decreasing OPEC revenues are primarily a result of decreasing production among a number of OPEC producers. 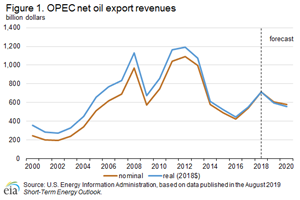 Although OPEC net export earnings include estimated Iranian revenues, they are not adjusted for possible price discounts that trade press reports indicated Iran may have offered its customers after the United States announced its withdrawal from the Joint Comprehensive Plan of Action in May 2018. The United States reinstated sanctions targeting Iranian oil exports in November 2018. Similarly, EIA does not adjust for Venezuelan crude oil exports to China or India for volumes that are sent for debt repayments to China and Russian energy company Rosneft, respectively, and thus do not generate cash revenue for Venezuela.

If the $711 billion in net oil export revenues by all of OPEC is divided by total population of its member countries and adjusted for inflation, then per capita net oil export revenues across OPEC totaled $1,416 in 2018, up 26% from 2017. The increase in per capita revenues likely benefited member countries that rely heavily on oil sales to import goods, fund social programs, and otherwise support public services. 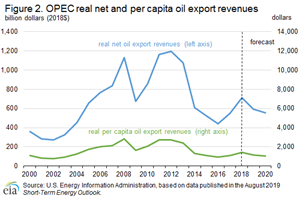 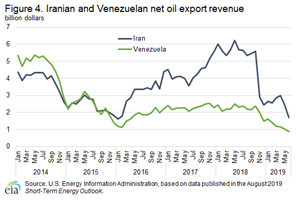 Despite the increase in annual average crude oil prices in 2018, OPEC revenues fell during the second half of 2018, mainly because of lower production and export volumes from Iran and Venezuela (Figure 4). EIA estimates that OPEC total petroleum liquids production decreased slightly in 2018 when increased production in Saudi Arabia, Iraq, and Libya could not offset significant declines in Iranian and Venezuelan production. Combined crude oil production in Iran and Venezuela fell by almost 800,000 bpd, or 14%, in 2018 and again by over 1.0 MMbpd in the first seven months of 2019. Although Iranian net oil export revenues increased by 18% from 2017 to 2018, a year-to-date comparison indicates a significant decrease in revenues in 2019. EIA estimates that from January to July 2018, Iran received about $40 billion in export revenues, compared with an estimated $17 billion from January to July 2019. Further decreases in OPEC members’ production beyond current EIA assumptions would further reduce EIA’s OPEC revenue estimates for 2019 and 2020.